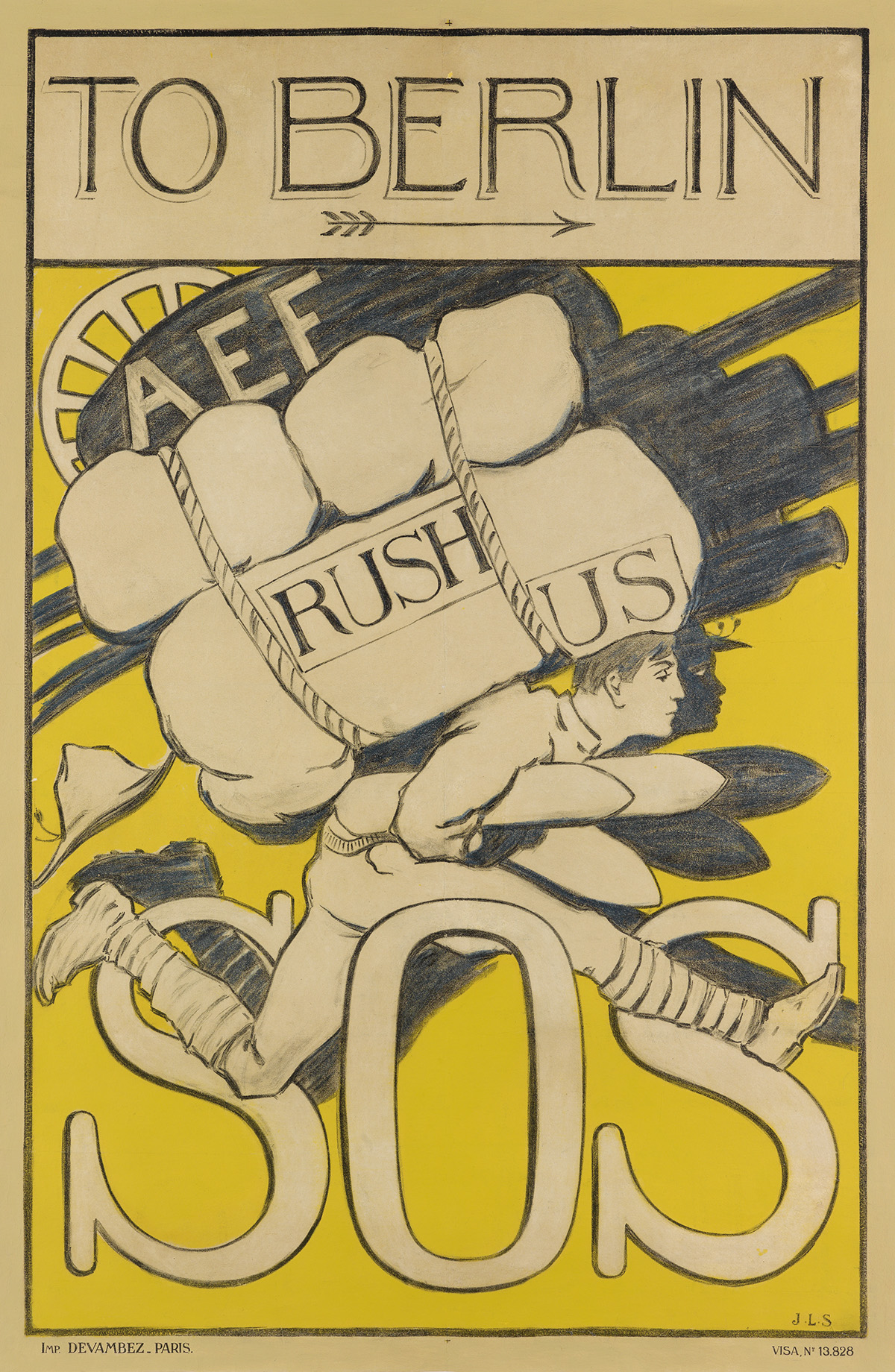 The only known World War I Poster to depict a black American soldier.  Recently exhibited at the Metropolitan Museum of Art, New York..

Two American doughboys, one white one black, sprint across France headed for the Western Front despite their incredibly heavy load of badly needed munitions and military equipment.

The more clearly visible of the two, the white soldier, is running so fast that his lemon squeezer, campaign hat flies off his head with the speed of his forward movement falling to the ground just behind his right boot with the tassels of its string, hat band nearly touching the poster’s left border. The tassels on the black soldier’s hat band are in a similar state. They fly upward indicating that he’s running flat out as well.

Perhaps the greatest indication of speed and urgency in this unique French poster is the flight of an arrow that, in effect, underscores the words TO BERLIN that serve as a signpost targeting their destination.

Both men carry artillery shells in their arms while simultaneously balancing their incredibly heavy loads on their backs. The word RUSH and the initials U.S. are stamped on the canvas bags that make up much of their burden indicating that their military supplies are provided by America, France’s new ally in its titanic struggle against the German invader. The letters A.E.F. stand for American Expeditionary Force, of which they are a part. It included, at its height, nearly 2,000,000 Americans, 350,000 of whom were black men serving mainly as stevedores and laborers in segregated U.S. army units offloading the mountains of American supplies that arrived daily in French ports. It was critical that these be transported to the fighting front as soon as possible given France’s precarious military situation.

France’s will to fight had been badly damaged by French troop mutinies on the Western Front. These had been caused by heavy losses suffered during largely fruitless attacks on German lines during the previous four years of heavy fighting. This meant that the French will to fight was in question when the U.S. entered the war in early April 1917 making its immediate support crucial to France’s survival and eventual Allied victory.

It was at this time (1917) that the Germans negotiated the harsh Treaty of Brest-Litovsk with the defeated Russians (Bolsheviks) enabling the German army to rush many of its troops from defeated Russia to embattled France where they hoped to tilt the balance of power on the Western Front in Germany’s favor and win the war before America’s strength in men and supplies tipped the balance of military power back to the struggling Allies. That never happened.  Enough American troops and supplies did arrive in the nick of time preventing widespread, German attacks in the spring of 1918, collectively known as the Second Battle of the Marne, from breaking through Allied lines and finally winning the war. It was at that critical moment that the role of some black soldiers serving in the A.E.F. changed from a vital support role to actually fighting the Germans.

The American army had already used black men in its combat units before. During the Civil War between 150,000 and 200,000 freed slaves served in the Union army. Immediately after the war (1866) the 10th Cavalry was formed using black troopers who had already served in the Union Army. These Buffalo Soldiers, as they were known, saw immediate action in the American west where they served with distinction both as scouts and combat troops. One of the 10th Cavalry commanders was General “Black Jack” Pershing who in 1917 became overall commander of the entire A.E.F.

Hard pressed as they were, the French requested that Pershing release American troops to fight alongside them during this drawn out battle. He sent four regiments of the 93rd Infantry Division which was a segregated, combat unit which, at this critical juncture, fought under French military command. They acquitted themselves quite well fighting in the Second Battle of the Marne. Helping to turn the tide of war in this final showdown with the German army earned the 93rd Infantry a unit citation for valor awarded by the grateful French.