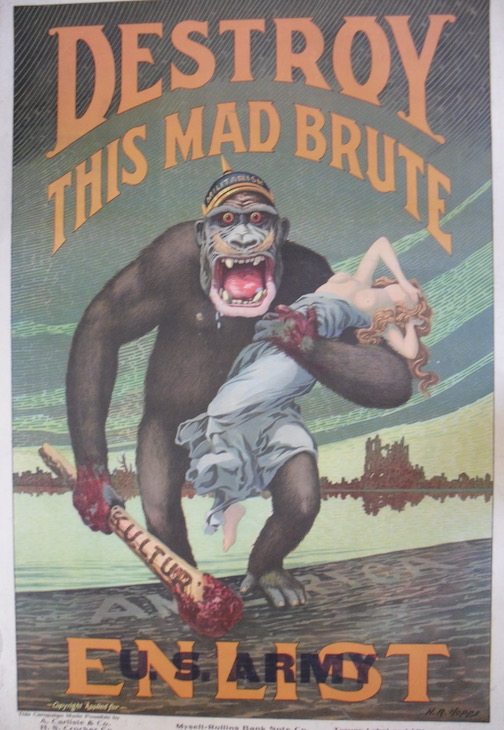 Harry R. Hopps was a set designer and owner of the United Glass Art Company in San Francisco when he designed this recruiting classic just as America entered World War I which was then already in its fourth bloody year when we joined the fight in April. It advertises an army recruiting station located 660 Market Street, today the site of a hair salon.

Its particulars are interesting and telling. It shows the terrifying image of an enraged gorilla standing erect on a beach somewhere along America’s vulnerable East Coast.  Its powerful hind legs are strong enough to support its hulking frame and the captive damsel in distress clutched in the crook of his powerful left arm.  This particular damsel is possibly meant to be Lady Liberty torn from her star shaped base in New York Harbor where she had guided and welcomed millions of European refugees since the French donated it to the U.S. in the 1880s as a sign of friendship dating back to our alliance with France during the Revolutionary War.  It also reflects age-old stories of Beauty and the Beast.

The war club he’s clutching in his right hand is partially covered in the blood of earlier victims and the German word Kultur written in block letters on its hardwood barrel, ironically referring the Germany as the land of Bach and Beethoven now reduced to depravity.

Just behind the “Brute” the Atlantic Ocean seems strangely placid and narrow more like a lake than an ocean. In the distance Europe’s ruins crowd the far shore, a silent testament to the brute’s destructive path across embattled Europe.

He wears a particular type of German helmet known as a pickelhaube which was taken out of service by the Germans in 1915.  The spike on top was purely decorative and easily got caught in the miles of barbed wire that stitched the Western Front from the North Sea to the Swiss border, or was visible above the rim of trenches. The other reason the Germans stopped using it was that it was mostly made of leather and offered no protection to the wearer’s head whatsoever. Hoops has taken the opportunity to write militarism across its front for added propaganda value.  Just below the helmet’s rim the Brute’s small, button-like eyes catch the viewer in their fierce, menacing glare.

It seems strange but this beast sports a blond upturned mustache. This, of course, is anatomically impossible but it’s probably a way of linking the “Brute” to Germany’s generals and high-ranking staff officers who often had mustaches. Even the Kaiser (Wilhelm II) had an upturned mustache and was the victim of much Allied caricature because of it.

The “Brute’s” oversized mouth is agape exposing a frightening set of canines dripping with saliva, a sure sign of a wild, rabid animal. The mouth is the focal point of this shocking piece. It looks as if the ‘Brute’s’ many victims will be devoured after being defeated.

Across the lower margin the word enlist is written in large block letters forming both a physical barrier and the and the logical course of action to be immediately taken to effectively resist the menace of German militarism.

The poster is a prototype for the 1931 blockbuster King Kong.  It is one of the rarest World War I posters as it was issued before America entered the war and only for the relatively small city of San Francisco.