Bernard Partridge: Take Up the Sword of Justice 1915. 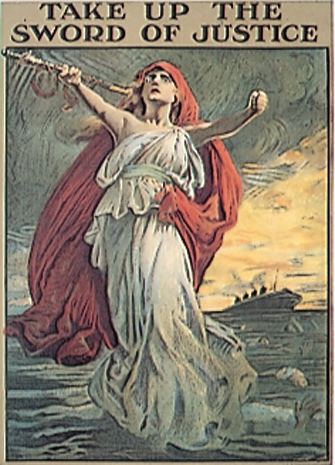 This poster was printed for the Parliamentary Recruiting Committee (PRC) in 1915. All told, the PRC produced nearly 200 recruiting posters for the government before Britain was forced to draft soldiers such was the need for replacement troops caused by the large number of casualties that deadlocked and seemingly endless trench warfare had already created.
Britannia is the national personification of Britain as a female warrior. She was first seen in classic antiquity, and is believed to be based on the Roman goddess Minerva. In this dramatic image she appears hovering above the sea in flowing robes where, enraged and indignant, she offers the viewer the “Sword of Justice.”  Indeed, she appears to be thrusting it upon the viewer. Around the hem of her voluminous robes victims of the Lusitania’s torpedoing struggle to stay afloat while on the distant horizon the stricken ocean liner sinks by the bows at a high rakish angle still identifiable by her four massive black smoke stacks. Normally these smoke stacks were painted bright red, but they had recently been painted black to disguise the Lusitania’s true identity. She also flew the flags of neutral nations from time to time on her Atlantic crossings, but evidently  that didn’t work either. She was the largest or one of the largest passenger liners in the world at the time. Any u-boat captain would know exactly what ship was appearing in his periscope.
The Lusitania was a Cunard liner built to compete for the transatlantic passenger trade. O n the 7th of May 1915 it was torpedoed without warning by a German u-boat (SM, U-20) off the Old Head of Kinsale along the southern Irish coast taking 1,194 passengers and crew, among them 128 Americans, to the bottom. This outrageous attack turned American public opinion against Germany permanently and was, all things considered, the chief cause of America’s entry in World War I on the Allied side some twenty-three months later.  The Lusitania sank to a depth of 300’ in just 18 minutes from the time when the U-20’s torpedo slammed into her hull on the starboard side at the waterline below the liner’s bridge. This short time, combined with the ship’s ever increasing list made it impossible for her crew to swing out the lifeboats greatly contributing to the tremendous loss of life.
The Lusitania’s captain was told that there were u-boats operating in the waters he was sailing, and was advised to steer a zig-zag course, but disregarded this crucial bit of advice.
At this time the Germans already knew that, although America was supposedly neutral  in 1915, it was  secretly selling large amounts of munitions from its armaments factories to the embattled British and French. In fact, the Lusitania was carrying 173 tons of rifle ammunition and artillery shells when she sank.
Just before she sailed from New York Harbor, the Germans printed notices in 50 American newspapers, including some in New York City, stating flatly that passengers aboard the Lusitania were sailing at their own risk, but just like the Lusitania’s captain who ignored the precaution to set a zig-zagging course, the liner’s passengers paid no mind to the official German warning.
After this sinking the Germans stopped their policy of unrestricted submarine warfare for a time because of the world-wide outrage that this single sinking caused, but an effective Royal Navy blockade of German ports, coupled with a costly stalemate on the Western Front, was causing near starvation in German cities, so, despite the increased risk of American involvement, the Germans were by then desperate enough to resume unrestricted warfare again in February 1917. At that time they made the fatal calculation that they could probably starve England out of the war with this brutal tactic before America’s entry into the conflict tipped the balance of power in the Allies favor.
Knowing that the Americans would in all probability eventually join the British and French, the Germans prepared for that near eventuality by stirring up trouble with Mexico along the U.S. southern border. In order to do this they sent a coded note to the Mexican government of President Caranza offering him their financial support and the return of territory taken by the U.S. as a result of the outcome of the Mexican-American War of 1846-1848 in return for a military alliance with Germany. This sounded totally unworkable to Caranza who had just finished fighting a civil war and wanted peace with America not another war. He rejected the German offer which was  contained in a coded note known as the Zimmerman Telegram.  Unfortunately for the Germans, this diplomatic note proposing the secret scheme was intercepted and decoded by English cryptographers in Room 40 of the British Admiralty who were then only too happy to show it to President Wilson. In addition to this treachery, the Germans resumed torpedoing American flagged ships. That was it. The American president had had enough. On April 2nd Wilson asked congress to declare war on Germany which they did just four days later.
Share this post
Share on FacebookShare on Facebook TweetShare on Twitter Pin itShare on Pinterest Share on LinkedInShare on LinkedIn Share on WhatsAppShare on WhatsApp