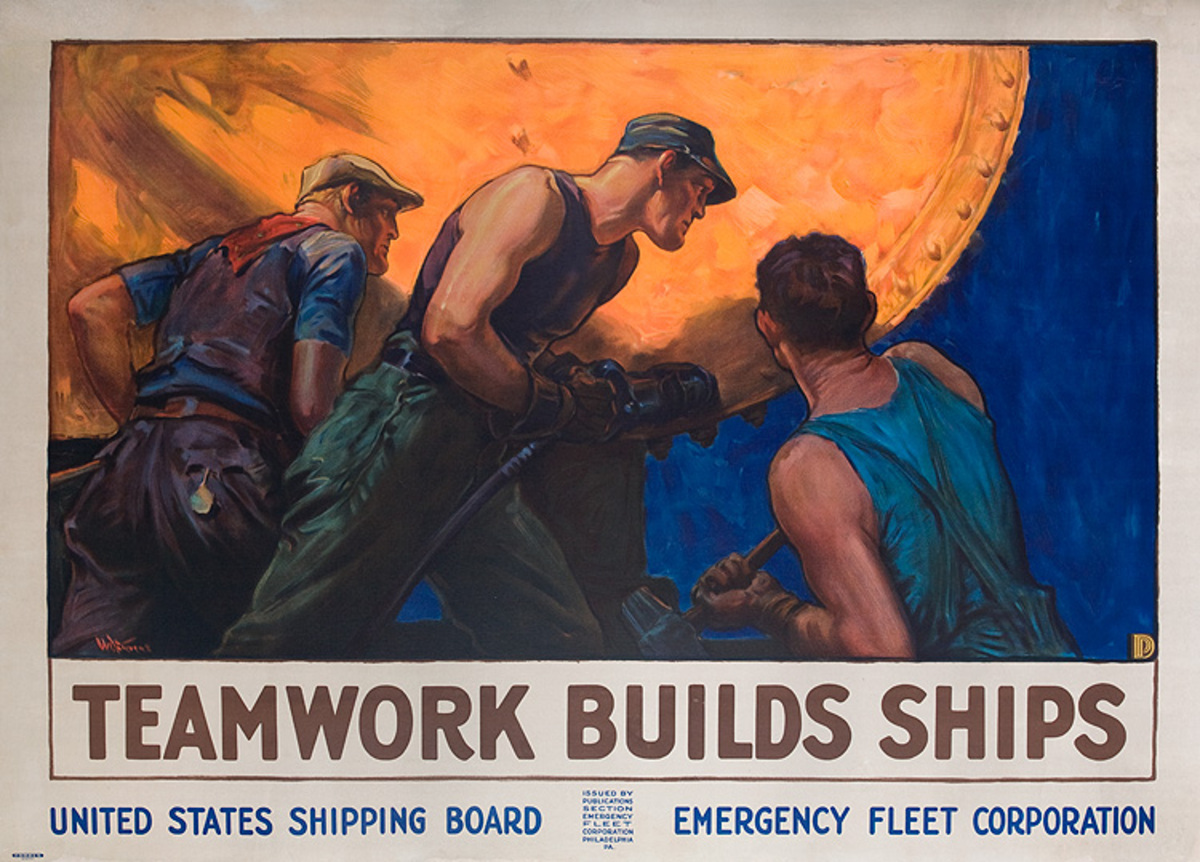 William Dodge Stevens Teamwork Builds Ships. 1917. A three man team of shipyard workers uses a pneumatic rivet gun to bolt parts of a merchant ship’s steel hull together. These parts were manufactured elsewhere and sent by rail to East Coast shipyards and then assembled on site. This was a new and more efficient way of shipbuilding brought on by the exigencies of war.

In this image the dominant figure is the riveter in the middle. He is also the largest member of this team. To his right another team member wields a sledgehammer to seat the bolts home when the riveter is finished with his part of the task. The third team member’s job is unclear because he is partially obscured by by the riveter.  One of the really beautiful aspects of this poster is the ship’s hull on which these men are working. It’s the single largest element in the poster. Its steel glows with a crimson intensity seen only in the deep red coals of a dying fire.
This poster was printed for the U.S. Shipping Board (USSB) which was established as an emergency agency by the Shipping Act of 1916. The U.S. was not a combatant in World War I at this time. The reason given for the creation of the USSB was the fact that the U.S. maritime fleet ‘s position had been eroding for several decades. The task of the USSB was to strengthen the country’s maritime position.
With America’s entry into the war in April 1917, its mission changed dramatically when it addressed America’s  shipping shortage with a massive building program and the acquisition of readily available existing hulls. This was done through the Emergency Fleet Corporation (EFC), a wartime government agency created on April 16,1917 just 10 days after America had to declare war on Germany because of its naval policy of unrestricted submarine warfare. The EFC was charged with acquiring, maintaining and operating merchant ships to meet urgent wartime demands. By the end of WW1, the USSB and the EFC became the largest entity in U.S. history with a fleet of 1,368 vessels totaling 7,498,075 deadweight tonnage.
As an aside it may be mentioned that the acquisition of existing hulls that’s already been mentioned included 91 German ships that were seized in American ports along the East Coast. Many of these were German passenger liners plying the Atlantic route between New York and the German ports of Bremen or Hamburg. The tonnage of these German ships was a considerable 594,696 gross tonnage.
Although no one knew it at the time, the Germans secretly operated a deadly sabotage ring from some of these interned ships. This was done with the connivance of the German ambassador to the U.S. at a time (1915) when he knew that discovery of this ring would certainly bring the U.S. into the war on the Allied side. This was a dangerous situation for Germany similar to their desperate policy of unrestricted submarine warfare that did eventually bring America into the war. After the sinking of the passenger liner, the Lusitania, in May 1915, it’s amazing that it took more than two years for America to enter the war.
This ring, which was actually a terrorist ring, was designed to stop the supply of artillery ammunition to Britain and France where it was needed to keep the invading Germans at bay.  Among other things, this secret ring of saboteurs was responsible for the Black Tom plot and explosion of 1915 that rocked New York City and caused a massive explosion of artillery shells ready to be sent to the Allies. These were stored in railroad cars on the  New Jersey side of New York Harbor. When these shells exploded, they damaged the Statue of Liberty and broke, it was said, every window in Manhattan.
Among these German saboteurs their was a biological warfare expert who attempted to start an anthrax epidemic along the East Coast! The object of this particular operation was to infect horse herds in ports along the East Coats that were intended to be transported to Europe where they were to provide the horsepower for moving artillery and shells along the muddy quagmire that often engulfed the Western Front.
Anyone interested in this largely unknown but fascinating story should read Harold Blum’s Dark Invasion.  If you do, I guarantee that you will not be able to put it down.
Share this post
Share on FacebookShare on Facebook TweetShare on Twitter Pin itShare on Pinterest Share on LinkedInShare on LinkedIn Share on WhatsAppShare on WhatsApp