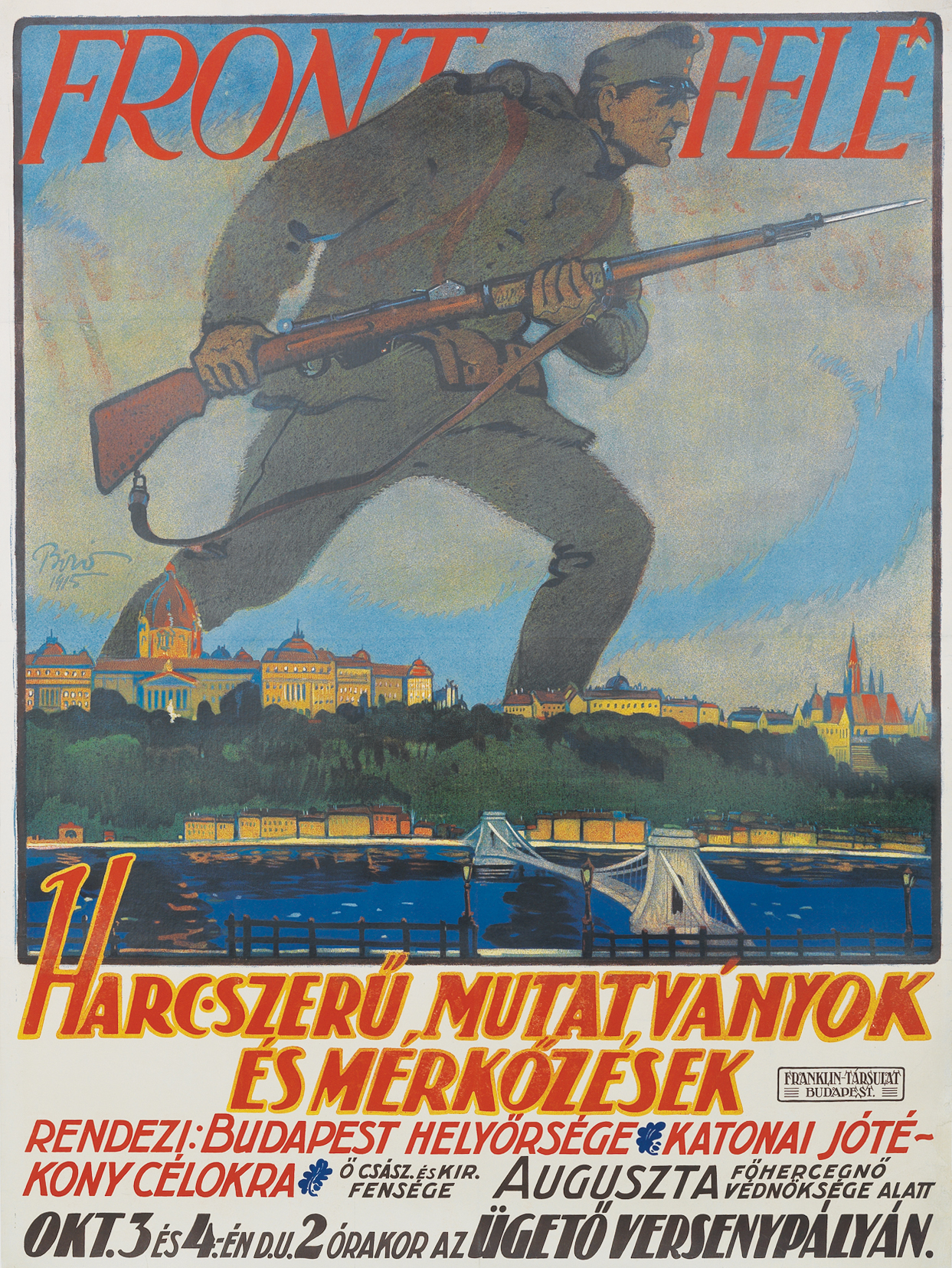 Mihaly Biro To the Front. 1915. Hungarian text advertises “Easy fights, stunts and games” at this show which includes an army parade with a military band. This extravaganza is organized by the Budapest Garrison for the benefit of military charities under the auspices of the Austrian Empire and the Hungarian Monarchy. Evidently it was so large an event that it had to be held at a horse track on the outskirts of the city normally reserved for trotting horses.  During World War I combatants sometimes staged these types of entertainments as fundraisers for some aspect of their war efforts. In Vienna, for instance, shows like this were held at the world famous Prater Fairground which is still in operation today. In New York City they were held in midtown Manhattan at a venue specifically created for the event aptly named Hero Land. In the distant past we have sold posters advertising wartime events held in both these cities. This type of poster is now quite rare.

This particular poster features a Hungarian soldier whose head is neatly framed by the poster’s title which runs along the top border. His colossal size is made all the greater when the artist places him atop Buda’s hilly landscape. Far below, Budapest’s famous Chain Bridge connects Buda with Pest pictured just across the Danube.

In 1914 Austria-Hungary, which sided with Germany during World War I, was thought to be a great power but events eventually proved otherwise. The Hungarian army consisted of 3,800,00 soldiers in 1914. That sounds impressive until you realize that France, Germany and Hungary’s main opponent, Tsarist Russia, all had armies twice the size of theirs. All told, between 1914 and 1918, 7,800,00 served in the Austro-Hungarian Army mainly as infantry.

Hungary’s armed forces were chronically underfunded. They entered WWI with insufficiently artillery and ammunition. Air forces were nearly nonexistent. The Hungarian Army before the war had only 42 military airplanes. As a consequence of these deficiencies, Hungarian troops were used mainly in defensive roles throughout the war.

When the German army collapsed on the Western Front in November 1918, the war was lost taking Hungary and Austria with it. Hungary immediately descended into Communist revolution and violent anarchy.  To make matters worse, the victorious Allies imposed a Draconian peace in 1920. This Treaty of Trianon compounded the disaster of World War I by by giving Hungary’s immediate neighbors most of her prewar territory. It’s estimated that this might be as much as 70% of her land.  It’s estimated that due to this change as many as 3,000,000 Hungarians  were now stranded outside its newly established borders.