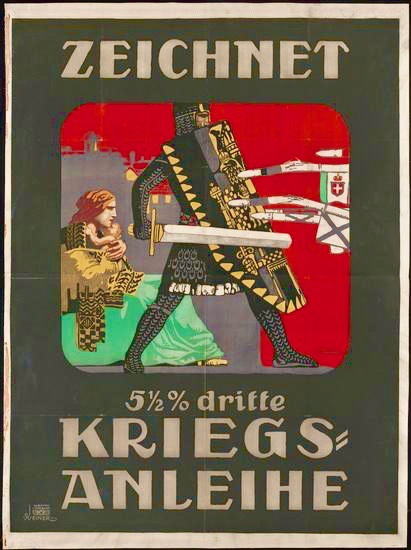 Erwin Puchuinger War Loan 1915. German war bond poster’s  title trnslatess “ Subscribe to the Third War Loan at 51/2% Interest.” All told, the Germans conducted eight war loan drives during the war. Germany not only financed its own war effort but that off its hapless, Austro-Hungarian allies as well. The Germans and the Austro Hungarians, collectively known as the Central Powers, raised 61 billion German marks during five years of fighting. Their opponents in the combined Allied armies spent a stupendous 156 billion U.S. dollars on WWI. The Allies simply had access to a global supply of men and money that the Germans didn’t. This fact combined with heavy losses on the Western Front and near starvation in Germany’s major cities caused by a blockade conducted by the British navy, eventually destroyed civilian and military morale. Germany was defeated in the field during November 1918.

This classic Austrian, World WarI war bond poster features a bold central figure protecting a defenseless woman and her child seen sheltering just behind him. In the distance, along the poster’s top border, a ruined city is silhouetted against a deep red, the color of glowing coals. One of the small features in this devastated landscape is a single onion dome tower, probably one from a Catholic Church. Taking this as a possible architectural clue, this small, distant building may be a reference to the state of Bavaria and the city of Munich in particular which suffered through two Bolshevik revolutions right after the war’s disastrous end.

Not to digress too terribly much, but at one point during all this political turmoil, a Bolshevik mob broke into the private residence in Munich of the Papal Nuncio to Germany who was then Cardinal Pacellli (1875-1944) and threatened his very life. Although he survived this harrowing moment, he never forgot it. This turned out to be important because Cardinal Pacelli was later elected Pope Pius XII in March of 1939 by the Vatican’s College of Cardinals, meaning that when he first became pope, he already had a fear and loathing of leftists of any stamp. Later this encounter  greatly affected his attitude concerning Hitler’s regime which he viewed, even considering its evident horrors, as a bulwark against godless Communism. Indeed, when the Germans invaded Russia in June 1941, he blessed their campaign

To turn our attention once again to Puchinger’s poster, we can see that the central figure is a German, medieval knight dressed from his helmeted head to toe in chain mail. In his left hand he holds a large, double bladed sword with which to smite his many enemies whose lances break harmlessly against the stout shield which he holds tight against his body with his left arm.  Although it’s stylized, emblems painted on his shield make reference to the Holy Roman Empire, the Hungarian monarchy and German history. One is a scepter topped with an orb and a small cross, possibly a reference to the Hapsburg Dynasty, founders of the Holy Roman Empire. Another object appears to be the Crown of St. Stephen, patron saint of Hungary. Still another is that of an eagle which has been associated with German nationalism since the early Medieval Ages.

These images are painted in the style of the Viennese Succession, an art movement begun in Austria in 1897. This, in turn, was part of the larger Jugendstil movement led by Gustav Klimt, Austria’s great symbolist painter. The Vienna Succession held several exhibitions a year, featuring the international avant-garde.  This poster’s artist, Edwin Puchinger, (1875-1944) was a Viennese painter, illustrator, poster artist and graphic designer at the turn of the 19th century.  He was member of both the Jugendstil and Gesamtkunstwerk art movement which sought to meld the fine arts with contemporary, applied arts. This poster is a prime example of art adapting to immediate, urgent purpose.

Obviously, there’s complex iconography in this poster. Even the lances that shatter against the knights stout shield have their own distinct stories to tell. Each represents the striking power of a different Allied army fighting the Central Powers. Two of these medieval weapons have already broken in vain attempts to pierce the knight’s shield. Different flags are attached to each lance.  One is the Italian flag, replete with the coat of arms of the House of Savoy, while the other displays, I think, the St Andrews Cross, a reference to Scotland and, by extension, the English army. The broken Italian lance my be a reference to the total collapse of the Italian line at Caperetto where a young Captain Erwin Rommel distinguished himself for his bravery and won the coveted Pour la Merit (Germany’s highest military honor) by leading his elite mountain troops on an audacious attack that surprised and then quickly broke the center of the Italian line in the southern Alps. Yes. This is the same person who later rose through the ranks to command the German Africa Corps in North Africa during World War II. As if Caperetto weren’t enough of a disaster, the Italians tried repeatedly to break through the Austrian lines to the east on the bloody Isonzo Front where they suffered heavy losses in nine or ten failed attempts to take heavily, defended Austrian positions. The Cross of St Andrews may be a reference to the failure of the English to brake through the German lines during 1916. This time period includes the ghastly Battle on the Somme where mass slaughter went on for days on end. On the first day alone 1,000 officers were killed outright as well as 20,000 of their infantry. Another 25,000 were seriously wounded.  The fighting at Passchendaele (Sept.-Nov. 1917) was even worse. There, the British suffered 244,897 casualties including 66,000 dead in a titanic, loosing effort to break the deadly stalemate on the Western Front.