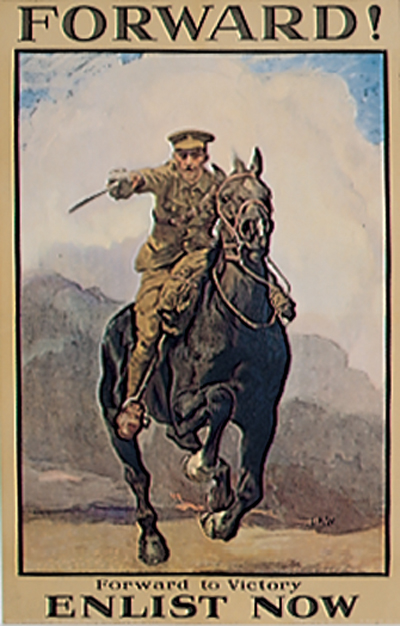 This famous Parliamentary Recruiting Committee poster shows a British cavalry officer pointing his 1908 pattern cavalry sword at the enemy while charging forward at a full gallop. At this time (1914) he was also armed with a full sized Lee-Enfield rifle through it’s not shown here. Cavalrymen were dressed in khaki and wore  service dress caps. They carried their ammunition in bandoliers like the one seen slung over the horse’s neck.

British cavalry were the first units to see action in WWI.  Captain Hornby of the 4th Dragoon Guards is thought to be the first British horsemen to kill a German soldier using his sword. This was just prior the the Battle of Mons in late August 1914 which was the first engagement fought by the British in Western Europe since the Battle of Waterloo (1815) nearly a century earlier.

Going into WWI British cavalry doctrine had just been influenced by its experiences during the Second Boer War (1999-1901) which was fought in the wilds of northern South Africa. During this conflict the British cavalry used dismounted firepower and covering fire from the flanks using machine-guns and artillery to support cavalry charges.

The traditional role of the cavalry was scouting as well as raiding enemy territory to damage its economy and infrastructure while avoiding enemy forces. On the field of battle cavalry were expected to break up enemy infantry and cavalry formations.

A cavalry charge was a very prestigious military action. So much so that in an earlier conflict, the Crimean War, (1853-1856) Louis Nolan of the 15th Hussars joined the Charge of the Light Brigade (October 1854) although he was never ordered to do so. This famous military action was considered suicidal at the time, but it was actually quite an unexpected victory in which the British lost only 100 men of the 600 British troopers who attacked fortified Russian positions at the end of a long, narrow valley. The Russians considered  British audacity so shocking that they never engaged the British cavalry again.

A young Lieutenant Winston Churchill  of the 4th Hussars did something similar when he joined the 21st Lancers for their cavalry charge during the Battle of Omdurman (1898). He later wrote a book entitled The River War about his experiences fighting in the Sudan.

During the Second Bore War the British cavalry out of necessity started to copy the Boers, who were Dutch farmers and crack shots, by dismounting and relying on their bolt action rifles to advance in open order over rough terrain. This tactic was first used during a charge at Klip Drift (March 1901) where the British used their rifles and horses rather than their swords and lances to get behind the defending Boers. Although this was not a cavalry charge in the strict sense, it was the last time that a full British cavalry division conducted a charge.

Prior to 1914, there were only 15,000 cavalrymen serving in 31 British Army regiments. Of these 12 regiments were based in Great Britain. After August 1914 these regiments joined the British Expeditionary Force (BEF) in France where they provided a reconnaissance force for six infantry divisions.

In 1914 a British cavalry regiment was composed of 26 officers and 523 other ranks.The commanding officer was a lieutenant colonel with a major as his second in command. Among the officers there was always a veterinarian who looked after the regiment’s horses. Other specialists involved with the horses were a farrier. who shoed the animals, a saddler sergeant and a saddle-tree maker. A typical regiment had 523 riding horses, 74 drought horses and six pack horses.

Although the great majority of the casualties were suffered by the British infantry, by war’s end the cavalry had 5,674 dead and 14,630 wounded. Of the 1,161 army lieutenant colonels killed during WWI,  only 28 were cavalry officers and several of them were killed after having assumed command of infantry battalions.

Two of the commanders of the BEF were cavalrymen: Field Marshals John French and Douglas Haig.