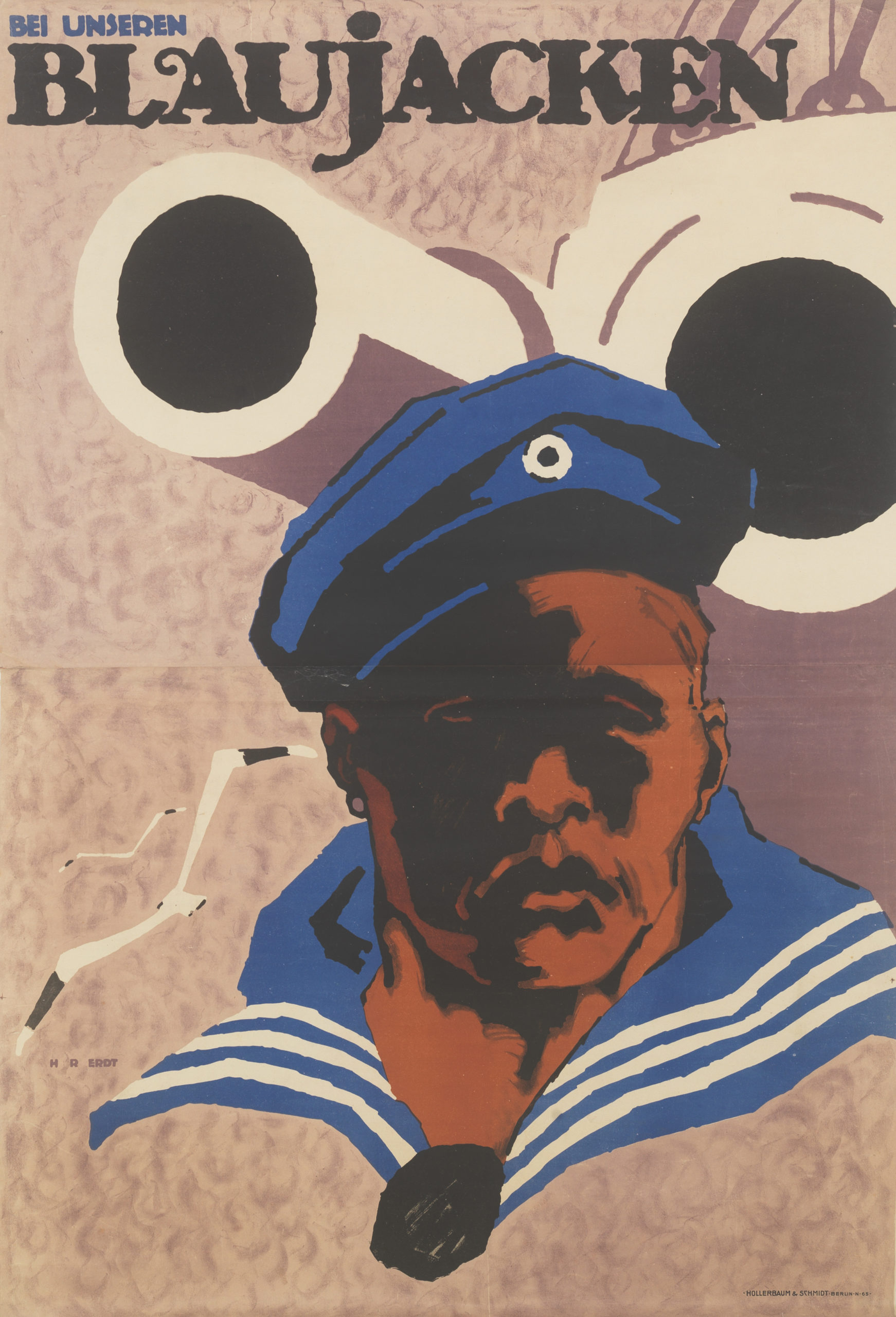 Hans Rudi Erdt (1883-1918) produced two WWI, German posters that are the subject of this blog: “Bei Unsern Blau Jacken” (c. 1917) which translates  “With Our Blue Jackets” and “Flieger Zur See” (c. 1915) which translates  “Naval Pilot.” These  propaganda posters were intended to bolster support for the German navy. Some believe that they are advertisements designed for films. There is precedence for this view. Erdt is known to have produced another propaganda, film poster for the government entitled “The Great Battle in France” featuring a sinister portrait of Germany’s overall military commander “General Paul von Hindenburg.”

“With Our Blue Jackets” features a striking portrait of a darkly tanned, German sailor posing below the enormous muzzles of two huge naval artillery pieces probably on the forward deck of one of the battleships of the German High Seas Fleet.  Just behind him and to his right two seagulls in flight wheel above the sea’s empty expanse. This modern, minimalist compositions is composed of  just these three elements.

“Naval Pilot” features a German pilot dressed in his leather helmet and flight suit saluting what may be a Dornier Do 18 German navy seaplane flying just overhead. While hailing the seaplane in flight, he stands on the wing of another seaplane floating on the sea. Sandwiched between the pilot and the seaplane he’s saluting is a German merchantman cresting a huge wave possibly a reference to Germany’s naval air arm’s role as a protector of their merchant marine.

During WWI the German navy took delivery of over 1,100 seaplanes. These were mainly unarmed biplanes with wings of unequal length and particularly large tail fins These planes were mainly trainers lowered and retrieved from the sea by means of large cranes typically secured to a ship’s aft deck. Aircraft carriers weren’t developed until after the war during the 1920s.

At the beginning of WWI (August 1918) the German navy had fourteen dreadnaught battleships and four heavy cruisers. In order to make Germany and imperial and industrial power, German politicians in the Reichstag passed the Navy Bills of 1898 and 1900 that called for massive, naval expansion. This buildup was masterminded  by Grand Admiral Alfred von Turpitz (1849-1950) who was appointed Secretary of State for the Imperial War Office in 1897. He was pushed aside in 1916 for political reasons, but he had been  the chief architect of Germany’s High Seas Feet.

It may seem odd, but the Germans didn’t start to plan using their navy if war broke out until July 1914, just weeks before it actually did. At this very early stage little thought seems to have been given to using U-boats against the Allies?  Germany resorted to using them by default. At first the Germans wanted to attack the English merchant fleet or attack a small part of the Royal Navy and destroy it thereby reducing the overall size of Britain’s larger navy by using their surface fleet, but at no time during the war did they have the resources to wage cruiser warfare making this a daft plan if ever there were. Within one week of the war’s outbreak , the German merchant fleet was swept from the sea. Of its 1,500 ships 1,000 were interned in neutral ports and another 245 German merchantmen were captured outright by the British.

Germany began its first unrestricted U-boat warfare campaign in February 1915. The British responded with a Royal Navy blockade of German ports in March of that year.This blockade immediately cut off  food and war materials  to Germany. The results were dire. Tens of millions of people all over the globe were killed by influenza. Toward the end of the war, more civilians died of the effects of hunger than German troops died in the trenches. According to Martin Gilbert, the famous British historian,  around 750,00 Germans died of hunger and its effects during the war. Even before the war started, Germany imported 25% of its foodstuffs. The German Foreign Minister, Theobald von Bettman-Hollwegs secretly confessed to German politicians that Germany could have been defeated as early as 1916 were it not for massive food imports from neutral Holland and Scandinavia.

Diseases associated with malnutrition such as tuberculosis and pneumonia soon appeared on a large scale across Germany’s civilian population and later contributed to the world wide influenza epidemic of 1918 and 1919. It’s thought that Hans Rudi Erdt may have contracted the disease and died of it during this time.

In addition to cutting off Germany from essential foodstuffs, British naval superiority allowed England to have another vital resource that the Germans didn’t have enough of : manpower. India alone provided 1,400,000 men. France drafted 500,000 troops, mainly from its African possessions. The British Dominions were a particularly rich source of fighting men. Tiny New Zealand, with a total population of only 1,000,000  sent 100,000 men to the British army. They suffered a casualty rate of 58%. Things were even worse with the Australians who sent 300,000 troops. They suffered a  casualty rate of 60%. The English themselves didn’t suffer anywhere near these murderous casualty rates.

With the adoption off unrestricted U-boat warfare, bad things were bound to happen. They soon did. On May 7, 1915 a U-boat torpedoed the Lusitania, a large,British passenger liner, taking 1,198 passengers to the bottom including 128 Americans. They never had a chance. The ship sank in just 18 minutes.

To be fair, even in this dreadful instance, the Germans had printed a notice in a NYC newspaper (the NY Post possibly?) warning Americans that they were at risk sailing to the British Isles in the Lusitania. This ship was, in fact, secretly carrying munitions for the British Army. It had also been equipped with gun mounts should the British want to convert her for outright military use . The Germans figured that these telling facts, which had been concealed by the British, made the Lusitania fair game regardless of who was on board.

Those critical factors aside, the torpedoing of the Lusitania shocked the world, but President Woodrow Wilson still wouldn’t abandon U.S. neutrality and wasn’t forced to do so by the Germans for another two years. After the Lusitania’s sinking, the German Kaiser, William II (1851-1941) forbade U-boat attacks on passenger ships in the waters surrounding Great Britain, but it was later resumed because of three factors: dwindling supplies of food, insufficient war materials of all types and continuing heavy losses on the battle fronts of which there were three: France, Russia and Italy.  By this time the Germans were  so desperate that they deliberately ignored the strong possibility that unrestricted U-boat attacks would eventually bring the U.S. into the war on the Allied side.

The frigid winter of 1916-1917, known as the Turnip Winter, was a particularly bad one. Turnips were all people had to eat. German civilians became so desperate that they  planted crops between the railroad ties or so my German godfather told me. He was young boy in Munich at this time. Added to this, German losses at the Battle of the Somme (1916) were also a contributing factor to the resumption of unrestricted U-boat warfare in February 1917. This was another act of out-and-out desperation. Although it was not designed to do so, this move brought a reluctant Woodrow Wilson into the war just two months later (April 1917).

The British changed their naval warfare tactics in a very significant way around this time by making all transatlantic ships sail in armed convoys. This move worked miracles. A staggering 99% of merchant ships in these convoys reached their destinations in the British Isles safely. That’s a truly amazing statistic.

No discussion of the WWI, German navy, no matter how brief, would be in anyway informative without considering the importance of the Battle of Jutland (May 1916). This great naval battle has the distinction of being the first and the last engagement fought between the British Royal Navy and the German High Seas Fleet. The Germans, in another fit of desperation, wanted to break the debilitating British naval blockade.

Although they were able to take a significant toll on the Royal Nav’s ships , sinking three battleships, three heavy cruisers and eight destroyers as well as killing 6,097 British seamen, the High Seas Fleet couldn’t break the blockade much less make any real dent in the numerically superior Royal Navy. Although the Germans sank more tonnage than the British, they ran for their home ports after the battle and were confined to Kiel and Whilemshafen for the remainder of the war.

After the battle, one of the commanders of the German High Seas Fleet, Admiral Scheer, told the Kaiser that naval victory could only be achieved by U-boats sinking British trade, but, as already has been mentioned, armed Allied convoys had already successfully nullified the once potent U-boat threat. What the admiral proposed simply couldn’t be done.

No one knew this better than the demoralized sailors of the German High Seas Fleet who were now refusing their officer’s orders. They knew that the war had already been lost on the Western Front’s many bloody battlefields. The fleet’s mutiny soon spread to the naval headquarters in Keil where in October 1918 Admiral Hipper, who commanded at Keil, ordered the fleet to sail into the British Channel and confront the Royal Navy again.  The admiral had no authorization for this order. Although it was soon canceled, the  mutiny continued to grow. This, in turn, helped fuel Germany’s November Revolution of 1918 which toppled the hapless Kaiser and replaced him with a parliamentary republic. This, however, didn’t stop the street fighting between Germany’s left and right wing factions which lasted from November1918 when the war ended until August 1919 when the Weimar Constitution was adopted.