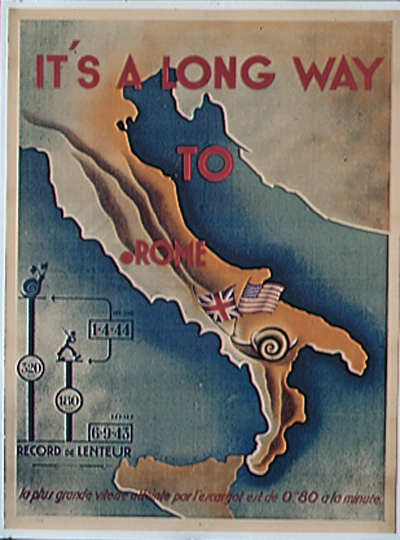 Artist Unknown: It’s a Long Way to Rome 1943. This is one of the most interesting World War II, German propaganda posters that we have ever had. Its title and the word Rome are both written in English while the supporting text running along the bottom and a bar scale appearing along the poster’s left margin are both written in French. They ridicule the snail’s pace of British and American offensives that took place after Allied landings in southern Italy in September 1943. The same day that the Allies landed Marshall Badoglio, Italian soldier and premier of Italy’s first anti Fascist government, took Italy out of the war, but he dithered too long with the Allies over surrender terms giving the Germans time to disarm Italian soldiers, occupy the country and build the first of a series of durable defensive positions  which was known as the Winter or Gustav Line. It stretched from west to east across the ankle of the Italian boot taking advantage of the Garigiiano and Rapido rivers just south it.. The Gustav Line was anchored by the Casino defile. Costly Allied attacks failed to break the line until one finally assault by Polish and French troops swarmed over the ruins of Monte Casino on May 11,1944 causing the Germans to retreat and finally relieving the pressure on the bridgehead at Anzio where  American forces had been pinned down for some time. Now the U.S. 5th Army could drive north to Rome.

The poster’s English title is a play on a World War I English song It’s A Long Way to Tipparary. Since the Germans intended this propaganda poster for distribution in Occupied France, It’s unclear why they would write part of their message in English.  The French text ridiculing the snail’s pace of the Allied advance was intended to cow French viewers in Occupied France with the strength and competence of the German Army as opposed to the incompetence and timidity of the bumbling Allies. French text along poster’s bottom calculates that the Allies are progressing up the Italian boot at a blistering rate of less than two feet a minute.

The poster’s bar scale calculates that at this snail’s pace it will take nearly two hundred days to go the  320 kilometers to Rome. Of course, this is a malicious calculation on the part of German propagandists.  Actually the U.S. 5th Army liberated Rome on June 4, 1944 just a day or so ahead of D Day (June 6, 1944). This dramatic development put the Italian campaign completely in the shade. At this point the Germans retreated to their Gothic Line in the northern Apennine Mountains. It was their last redoubt. They surrendered unconditionally on May 2, 1945 less than one week before Victory in Europe Day.