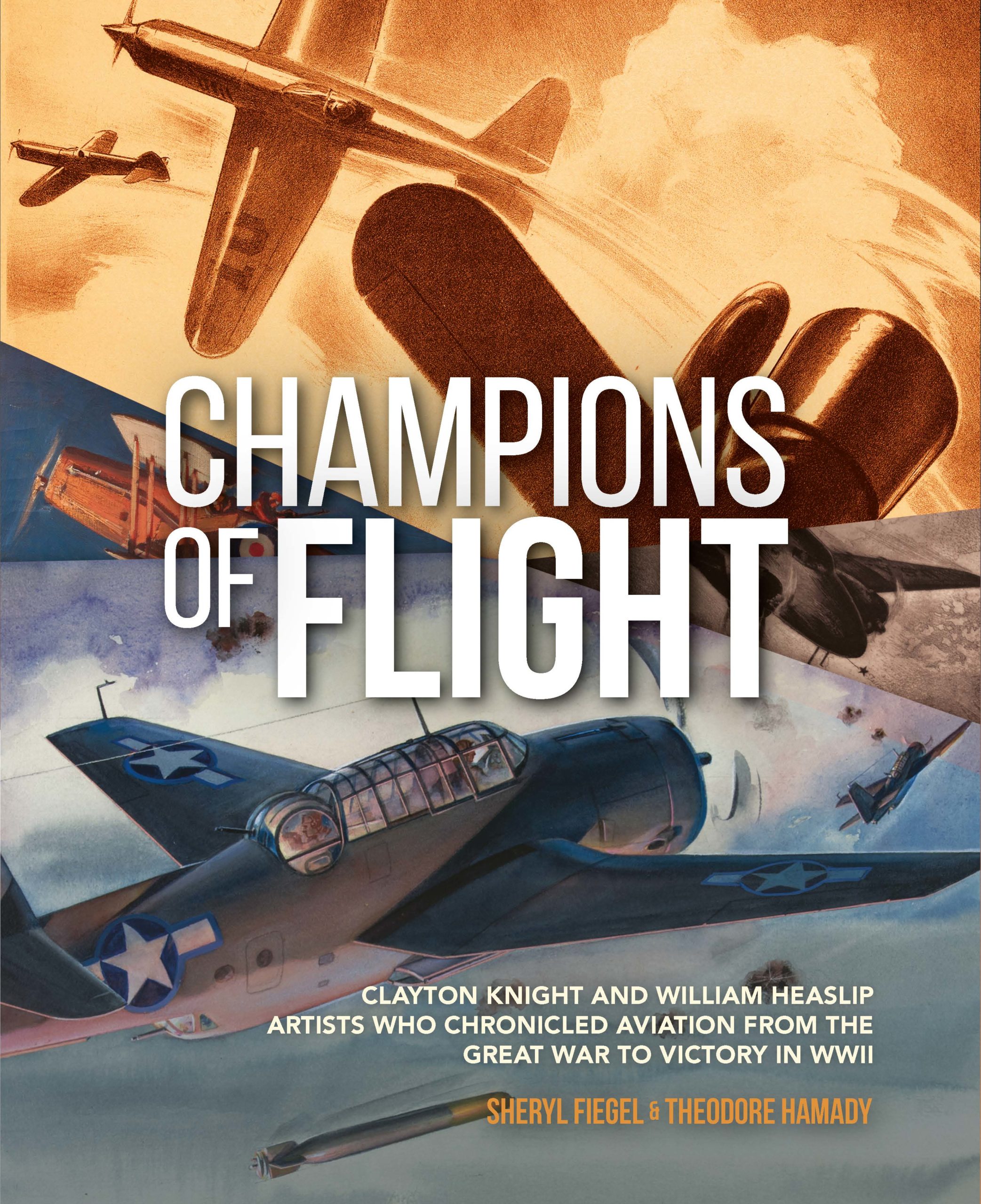 Champions of Flight focuses on two outstanding, aviation artists who worked between 1919 and 1945, William John Heaslip (1898-1970) and Clayton Joseph Knight (1891-1969). They were both former military men who later studied art at prestigious American art schools. Together they combined their past military experiences and their keen interest in aviation to become leaders in the commercial illustration movement of the 1920s and ’30s. Their work introduced generations of Americans to the rapid development of civil aviation in peacetime and the importance of military aviation in war.

I should mention that one of the book’s authors, Ted Hamady, is a legendary customer of Meehan Military Posters and an avid collector of aviation art. He is also an aviation historian who has published many articles and a well-received book The Nieuport 28: America’s First Fighter.  His coauthor, Sheryl Fiegel, holds undergraduate and graduate degrees in art history from Tufts University. She became interested in Knight and Heaslip’s work while organizing a tribute, under the auspices of the 50th Anniversary of World War II Commemoration Committee, honoring American combat artists.

As I perused my copy of Champions of Flight, I noticed two posters that were familiar: “Let’s Go USA” and the “US Navy Needs Patriotic Americans!” These Army and Navy recruiting posters both date from 1941 when America first entered the war and were part of a larger, government, preparedness campaign. Actually, America started preparing for the next war soon after World War I ended. The U.S. Air Service, America’s World War I air arm, became part of the newly formed Army Air Corps in 1926. The Navy launched its first aircraft carrier, the U.S.S. Langley, in the 1920s by building a wooden flight deck on top of the hull of a former collier. Carriers, and the fighters, scouts, and bombers they carried, became essential parts of naval operations during World War II, especially in the Pacific. Not to be outdone, the army used the interwar years to develop long range bombers for the Army Air Corps (re designated as the US Army Air Forces in 1941) missions that could take the fight to enemies far and wide.
Both Clayton Knight and William Heaslip were so talented that Cy Caldwell, Associate Editor of Aero Digest, thought that they were the only artists who could actually draw an airplane in flight. This is evident in the illustrations that Clayton Knight did for the Chance Vought Corporation, manufacturers of the 02U Corsair, a sturdy biplane used as an observation and light bomber by the Navy and Marines. It saw extensive service in the 1920s in China, Haiti and other nations including Nicaragua where Marine pilots used it as a light bomber and evacuee aircraft against Sandino rebels in Nicaragua in 1927.

William Heaslip’s artistry is on display in a series of highly detailed illustrations on pages 201-207. These original art works later became a distinctive series of posters some of which we have sold over the years. These posters deal with air combat in one form or another including combat in the English Channel, The Battle of the Blitz, the RAF bombing German cities, and Fairey Swordfish torpedo bombers attacking the German battleship Bismarck that was sunk by a deadly combination of torpedoes and naval artillery. It sank in the Atlantic taking 2,310 of its crew to the bottom. The British didn’t pick up many of the German survivors in the water because they were afraid of being torpedoed by U-boats themselves. Another set of illustrations, drawn in great detail by Heaslip, includes a Marine antiaircraft battery firing during the defense of Wake Island in the Pacific, Japanese aircraft dueling with U.S. PT boats on Manila Bay and Japanese bombers attacking the Burma Road, a vital Allied link to embattled Nationalist China.
Generally speaking, most World War II American posters don’t have the precise details rendered by Knight and Heaslip. Other artists told the public how to behave in wartime and how to contribute to the war effort as quickly as possible. Full wartime production that met highly precise machine standards wasn’t achieved until late 1943. As a major part of this industrial effort, the U.S. produced 300,000 military aircraft and trained their crews.  In stark contrast to this amazing feat of wartime production, Fiegel and Hamady point out that during World War I, the U.S. government was unable to design, build and ship combat aircraft to France for operational use by the US Air Service (USAS) in a timely fashion. The USAS was thus forced to rely on its allies to supply aircraft to enable its fledgling air service to enter aerial combat.

Years later this critical fact was not lost on FDR who knew that during World War I President Wilson hadn’t mobilized America’s manpower and industry in time to train our own troops or manufacture our own weapons. Roosevelt had to avoid a repeat of this potentially disastrous military situation. While the U.S. was still bound by neutrality laws, he managed weapons transfers under the Lend Lease Act to England, Russia and Nationalist China and used government spending to increase armament production of which aviation was becoming a significant part.

Both Knight and Heaslip produced recruiting posters for the Army Air Forces.  Examples of posters appearing in Champions of Flight include the B-25 Mitchell and B-26 Marauder medium bombers, the B-24 Liberator heavy bomber, and the vaunted B-29 Super Fortress.

As an aside I should mention that Champions of Flight is a treasure trove of facts that makes for some delightfully interesting reading. I learned from the brief text accompanying an illustration of Amelia Earhart drawn by Clayton Knight, that she was the first woman to fly an odd aircraft called an Autogyro, a progenitor of the helicopter. This hybrid aircraft had a small propeller to provide thrust, fuselage and tail with ailerons, elevator and rudder for flight control like an airplane as well as large horizontal rotating blades for lift that we associate with today’s modern helicopters.

Possibly the most telling image in Champions of Flight, especially from a military poster dealer’s point of view, appears on page 250. It’s a highly detailed illustration by Clayton Knight showing a massive fly over of U.S. Navy Grumman F6F Hellcat and Vought F4U Corsair fighters. Just below this air armada (that included B-29 bombers but not shown in the illustration), the battleship U.S.S. Missouri provides the naval stage for the ceremony marking the end of World War II on September 2, 1945 when the Japanese delegation signed their unconditional surrender on the Missouri’s deck. General Douglas MacArthur, victor in the Pacific, presided over this sobering occasion.

Clayton Knight’s and William Heaslip’s goal of victory over the Axis had been achieved. The importance of air power, that they had steadfastly championed in peace and war, played a major part in achieving victory in World War II.